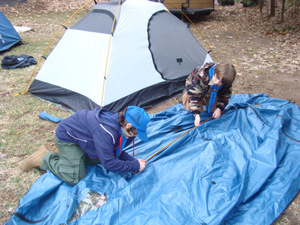 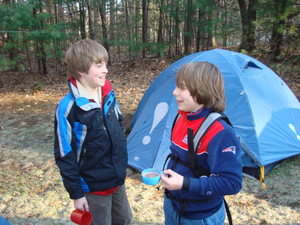 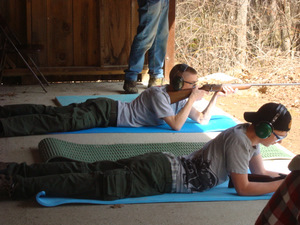 This was the first outing with some of the new scouts who recently crossed over from Webelos. It was a great weekend in that the new boys were eager to learn about camping and the older boys were great leaders and mentors. We met at Elks at 5:00, packed up and were at Medfield Sportsmans Club around 6:15. With the longer days and daylight savings it was nice to have daylight while setting up camp. The boys did so very quickly considering the number of new scouts and also considering this was the first time we used our 10 new tents.

After getting all of the equipment put away the boys started building a campfire. With the younger boys watching carefully the older boys showed them how build the fire and it wasn’t long before it roared to life. Friday evening was colder than forecasted so everyone had to add a few extra layers of clothing. After sitting by the fire and talking into the evening everyone headed to bed. It was a cold night and some of the boys were not as prepared as they could have been. We woke at 6:00 a.m. to find heavy frost on the tents. Although a little chilly all of the boys did fine and we started a campfire as soon as they were out of their tents. Once everyone was up and warmed by the fire we raised the colors and started cooking breakfast. As the sun rose the temperature climbed and it turned into a beautiful day.

Rifle Shooting
After breakfast several members of the sportman’s club set up the rifle range and at 9:30 Paul Schwartz (certified Instructor) and John Meincke (certified Range Safety Officer) arrived. They first had all of the boys gather around for some lessons in firearm safety and instructions about how to safely handle the 22 caliber rifles they would be shooting. The boys then broke into their patrols and each patrol took 30 minutes to shoot 30 rounds each. The two instructors did a fantastic job teaching the boys about eye dominance, the proper use of eye and ear protection and how to safely handle, load, aim and fire the rifles. All of the boys had a great time.

Service
While one patrol was at the range, the other boys provided some service time to the club. The boys did a great job stacking a large amount of split firewood. They formed a line and passed the wood down while some of the older boys stacked it. They spent about an hour and a half doing this while taking turns at the rifle range. They also spent time picking up trash around the ranges that were not being used.

Hiking
After finishing the shooting and service work the boys went back to camp to prepare lunch which was pretty quick and we were on the trail by 1:30. Ethan, one of the patrol leaders, had the map and led the troop on a hike through Noon Hill Reservation. We wound our way through the trails and made it to the summit of Noon Hill which provided a great view with Gillette stadium out in the distance. After a short rest there, we headed back to the site along a different route. It was a beautiful day for a hike and none of the boys had any problems along the 2 mile route.

Dinner and Campfire
When we returned, the boys had some down time and used part of that time to prepare some skits for the campfire that night. They soon began cooking dinner and each patrol had different food that included, Steak, Chicken, Hamburgers, Mac and cheese and Hot Dogs. As the boys finished cleaning up they started throwing a Frisbee around and this grew to include most of the troop. They kept the Frisbee game going until it was too dark to see. Richie (SPL) led a campfire program which included skits from each of the patrols. Then we reflected on the weekend and talked a bit about it. Richie ended the campfire with Scout Vespers and everyone went to bed.

Sunday Breakfast
Sunday morning we were up at 6:00 and had all of the tents down and equipment packed by 7:00. The Medfield Sportsmans Club provided a great breakfast for us that included Pancakes and Sausage as well as fruit, cereal and corn muffins. After breakfast we packed up the vehicles and headed back to the Elks.

Thanks to the Medfield Sportsman’s Club
We would like to thank the Medfield Sportsman’s Club for all of the support they provided this weekend. The camping area, rifle range, ammunition, safety equipment and Sunday breakfast were all provided by members of the club. All of the members that helped out were incredibly friendly and really made it a great weekend for the boys. Thank you! 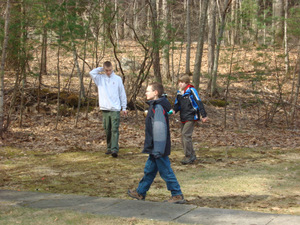 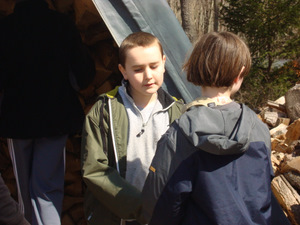 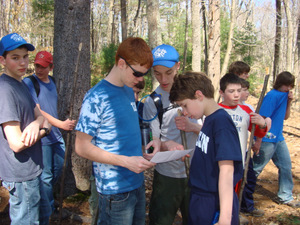 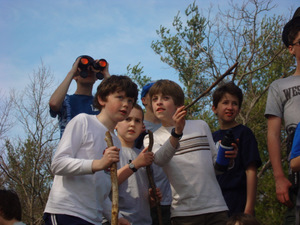 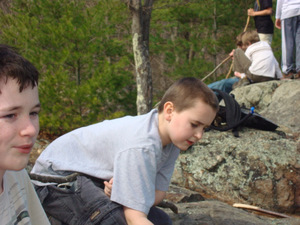 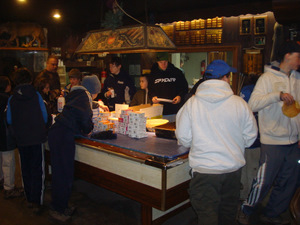 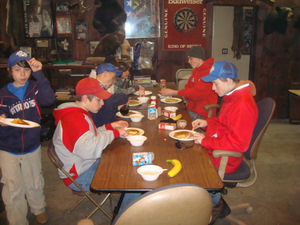