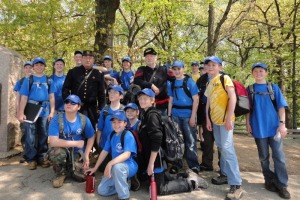 Over Spring Break we went to Gettysburg, Pennsylvania. We loaded 2 x 15-passenger Vans and an equipment truck Tuesday morning and headed out for the 8 hour drive. We arrived at Camp Tuckahoe in Dillsburg, PA at around 6:00, set up camp at the Susquehanna site. Gettysburg National Military Park and the BSA have created a National Heritage Trail program that allows scouts to earn a medal for completing 5 different hikes and tours that provide a thorough overview of the Battle of Gettysburg and the importance of this battle to the outcome of the Civil War. We completed all of the requirements and every scout received the Gettysburg National Heritage Trail Medal.