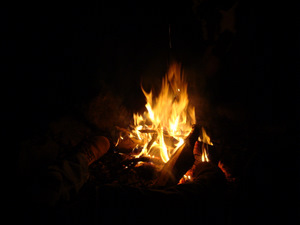 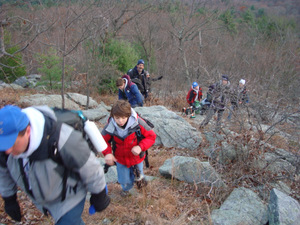 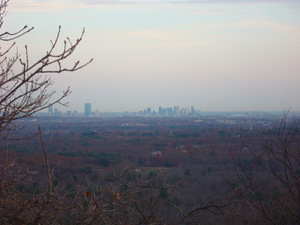 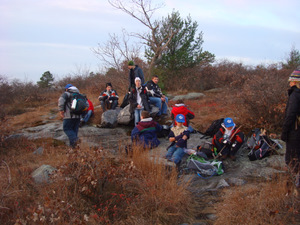 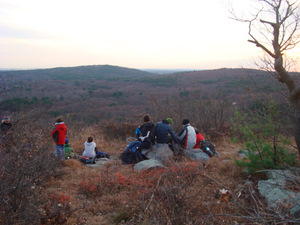 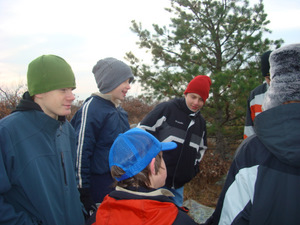 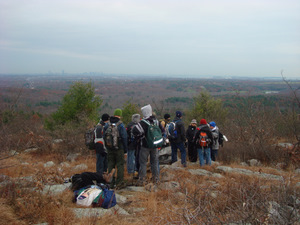 The troop had a great weekend in the Blue Hills Reservation. We arrived at Camp Sayre at around 6:30 on Friday and had a 10 minute night hike to the camp site. It was dark when we arrived and the trail to the camp site was not very well marked. Although Mr. Rich knew the way we had a couple of adults arriving late and so each scout tied a glow stick to the trees along the trail. This allowed Mr. Molloy and Mr. DiMartino to easily find us and remove the temporary trail markers along the way.

Although we arrived after dark, the skies were clear and it was a full moon which really lit up the area. The boys did a great job setting up their tents and putting the equipment away and then immediately started a campfire. After relaxing by the fire for a while most of the troop went to bed while the Patrol Leader’s council met to discuss the early morning hiking plans. We had reviewed both hiking and cold weather camping skills at the previous two troop meetings and it really paid off. All of the boys were well prepared and although the temperature dropped to 28°, everyone stayed toasty warm in their sleeping bags.

Saturday we were up at 5:30 and on the trail by 6:00 with Flash lights and head lamps blazing. We hiked a little over a mile and made it to Hancock Hill just as the sun was rising over the hills. It was a beautiful sunrise and we were all ready for a warm breakfast. Each patrol brought a backpacking stove with them and boiled water for a trail breakfast of Oatmeal, Fruit and Hot Chocolate. And although not exactly trail food, the Tree patrol managed to fry up a little bacon as well. After some warm food we were ready to continue the hike.

We quickly made it over the top of Hancock Hill and found a great view of the weather observatory and Eliot Tower out in the distance. They both looked very far away and there was some disbelief that we would be hiking that far. After hiking for a couple of more hours we made it to Eliot Tower at the top of the Great Blue Hill. We took a break there and had some snacks. We then went a little further to take a look at the weather observatory. Many of the boys were interested in the various weather measurement instruments that could be seen there. Although we had been on the trail for several hours everyone was doing a great job and there were a lot of smiles and joking around. We had also stopped several times to add or remove layers. Everyone was well prepared and regulated their temperature very well.

The hike from the observatory to the Park headquarters had some challenging climbs but everyone made it through without issue. We stopped outside the park headquarters and each patrol heated up some soup for lunch.

After lunch we decided to split into two groups so that anyone who was tired from the morning of hiking could head back to camp and complete the 5 mile hike. The troop split up pretty evenly and half the troop continued on to complete the 9 mile hike. The rest of that hike was along more rugged trails and required us to move a little faster to be back by dark. Once again, the boys did a great job keeping up the pace and having a good time. On the return trip we were able to take few minutes to watch the sun go down behind the Great Blue Hill and many of us stood mesmerized by it. With the sun down over the horizon, we picked up the pace and made it back to camp just as the last bit of light was fading.

Back at camp, the 5 milers already had a fire going and were taking some time to relax and begin preparing for dinner. A few of the scouts helped peal apples for some dutch oven Apple Crisp that Mr. Molloy was preparing. Each patrol cooked their dinner and we ate under the moonlight. After that we just relaxed by the fire and told stories and jokes.

Sunday morning the boys woke up early, built a campfire and prepared breakfast. While some were cooking others were breaking down the camp. After everything was cleaned and packed we all put on our backpacks and trekked out to the parking lot. Along the way we passed a lot of other scouts who had been staying in the cabins at camp Sayre. They all looked on with respect as Troop 126 hiked by with full packs and the satisfaction of having met the challenge of the cold weather and the long day of hiking.

The entire weekend was a great success. Everyone stayed warm both while sleeping and hiking. Four of the boys met some of the requirements for their 2nd Class rank by completing the 5 mile hike and leading the way and demonstrating their map skills through the Blue Hills trails system. We also learned a little about trail cooking and using backpacking stoves. More than anything each boy came home with the satisfaction of knowing what they had accomplished. 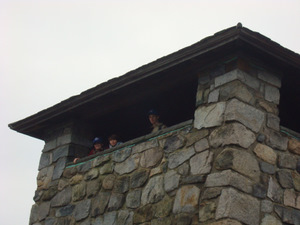 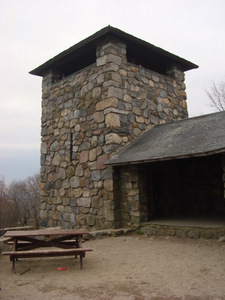